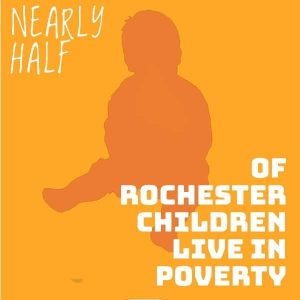 No child is predestined to live in poverty.  And even though the United States is among the richest countries in the world, we consistently rank as having one of the worst child poverty rates among, for instance, the 37 industrialized countries in the Organization for Economic Cooperation and Development.  Nearly 11 million children live in poverty in the U.S. today.

There is nothing natural or inevitable about the fact that nearly 1 out of every 2 children (22,000) in Rochester live in poverty, or 1 out of every 5 (32,000) in Monroe County, or 1 out of every 7 in New York State – 712,000 children — according to 2020 U.S. census data.  The pandemic pushed 325,000 more children into poverty in New York State by July 2020, including 10,000 more children in Monroe County, according to the United Hospital Fund.  And due to structural racism, child poverty among New York State’s children of color approaches 30%.  In our region, Black children are nearly 4 times more likely to live in poverty than white children, while Latino children are 3 times more likely to experience poverty, according to the Rochester Area Community Foundation.

Bad public policy – or the absence of good policy – is far and away the most important reason why so many children are subjected to daily harsh deprivations of too little nutritious food, or insecure housing or other basic necessities.  Proof of this is that the most significant reduction in child poverty in any single year in modern American history is now underway.  Thanks to President Biden’s American Rescue Plan, there is a dramatic expansion of the federal Child Tax Credit, making it fully refundable, so that children in the lowest income families can receive a now-higher maximum benefit of $3,000 – $3,600, and removes the lower income threshold, so families with little or no income will qualify.  Before now, families of more than half of Black and Hispanic children didn’t qualify for the maximum benefit (compared to 23% of white children), and 1 in 5 Black kids got zero.  This one change will lift nearly half of our nation’s children out of poverty.  The anti-poverty impact of the federal Child and Dependent Care Tax Credit and Earned Income Tax Credit were also strengthened.

But there are many more opportunities — at every level of government — to do more.

Join the fight to cut child poverty now.  You can weigh in with your elected officials by signing up here for our online Advocacy Network.