A quarter billion dollars for RCSD likely out of federal stimulus, less for other districts

A quarter billion dollars for RCSD likely out of federal stimulus, less for other districts

Imagine someone who’s chronically undernourished coming across a tractor-trailer full of frozen food. There’s an oven to cook it but no way to keep it cold.

Such is the strange situation in the Rochester City School District, which finds itself flooded with federal stimulus funding and yet still stuck with the basic budgetary dilemma of fewer students and rising expenses.

RCSD is in line for about $87 million from the COVID-19 relief bill that Congress passed in December. The more recent bill signed into law this month will provide an even bigger chunk of money, in the neighborhood of $200 million.

Combined, that represents nearly one third of the district’s current $928 million budget. But there will be strings attached to its use, both from the federal and state governments. Rochester or other districts can’t simply sock the money away.

Instead, the goal is to find one-time uses that won’t lead to a major let-down a year from now when the money goes away.

“When you get an infusion of cash like this, you’re not just going to hire a bunch of staff for a year and then lay them off again,” said Brian Cechnicki, executive director of the Association of School Business Officials of New York.

“It’s all well and good that districts will have this extra money for 2021-22 school year, but if the state allocates it in a way that creates a fiscal cliff, we’ll be right back where we were five years ago.”

Cechnicki was referring to a similar effect after the state eliminated the “gap elimination adjustment,” providing districts with several non-recurring shots of funding.

Most importantly for RCSD, the federal largesse does not alter the fact that the district is losing about 10% of its enrollment each year, even as employee-related expenses rise. Add the district’s nearly depleted fund balance, and the stimulus money seems more like a mirage than an oasis.

“We have to really ensure we understand it will require future financial adjustments because we won’t have that same amount (in 2022-23),” Superintendent Lesli Myers-Small said.

Eamonn Scanlon, education policy director for The Children’s Agenda, estimated RCSD is in line for at least $201 million from the March stimulus package. 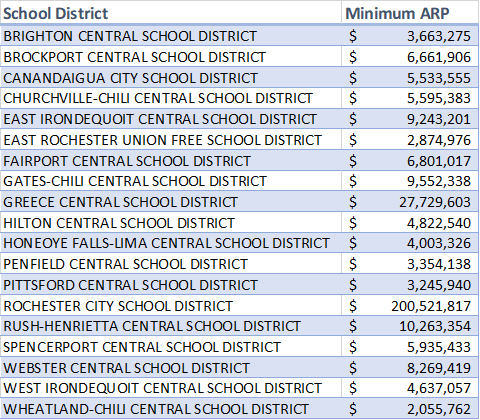 Greece could get $27 million, Scanlon said, with other local school districts receiving between $2 million and $10 million. The calculation is based on the share of federal anti-poverty money each district receives.

“Hopefully there’ll be a mix of investments in immediate issues students are facing …. and then down payments and investments on other things,” he said. “You can’t spend $287 million without having staffing, but you can at least balance it so state revenues will be able to support that level of staffing later on.”

Districts are awaiting word from the state on exactly how much money they’ll get, how they can use it and how long they have to do so.

For example, Cechnicki said he hoped the state would allow districts to spend the money over two years rather than just one.

There is also the question of whether the state will intercept the federal funding to partially offset its own contribution. Districts grumbled and progressive advocates howled when Gov. Andrew Cuomo unveiled a “pandemic adjustment” last year.

Separate funds for state and municipal governments, though, have partly filled the projected hole in the rest of the state budget, meaning there is less need to lessen education spending to plug it.

Myers-Small initially was planning to present her budget proposal on March 16, but it likely will be postponed until there is more clarity around the stimulus funding. At a board meeting on Thursday she said the 2021-22 budget likely will include more layoffs.

“Given the fact we do have declining enrollment – we haven’t finished our final analysis, but yes, we’ll more than likely have to have layoffs,” she said.

In response to a question about a full reopening of school in the fall, the superintendent said it’s too early to say.

“That certainly is my heart’s desire,” Myers-Small said. “But until we get those (CDC) guidelines, we’re pigeon-holed a little as far as what it looks like.”