How the Child Poverty Reduction Act would work 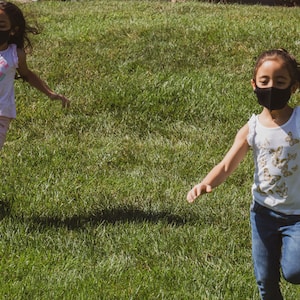 How the Child Poverty Reduction Act would work

Despite its reputation as one of the most affluent states in the United States, 18% of New York’s children lived in poverty in 2019, a rate higher than all but 18 other states in the country. This issue has been compounded by COVID-19 and the resulting economic downturn, plunging an estimated additional 325,000 NY children into or near poverty between March and July.  To begin to address this sobering reality, The Children’s Agenda is pleased to join partners in the community and champions in the State Senate and Assembly to urge passage of The Child Poverty Reduction Act.

How the legislation would work:

S.9012/A.11063 (Ramos/Bronson) legislation establishes a Child Poverty Reduction Advisory Council tasked with developing a plan to cut New York’s child poverty rate in half over 10 years. The Council will explore expanding specific policies, making new recommendations, and releasing reports to make sure that New York meets its goal. The Council will develop and publish a timeline with yearly benchmarks. Policy proposals reviewed by the Advisory Council will include, but will not be limited to:

This legislation would also require an evaluation of the effects that any adjustment/reduction, by the director of the budget, will have on child poverty and requires the evaluation to be made available to the public.

The prevalence of child poverty is not evenly felt among racial and ethnic groups in New York, as child poverty rates in New York are considerably higher within particular minority communities. The poverty rate among American Indian, Black, and Hispanic children is near or above 25%, double that of Non-Hispanic White children.

While children live in poverty in every corner of the state, child poverty is particularly concentrated in certain communities within New York State. Larger Upstate cities such as Buffalo, Syracuse, and Rochester have child poverty rates approaching nearing 50%, while many other urban communities have rates significantly above 30%. 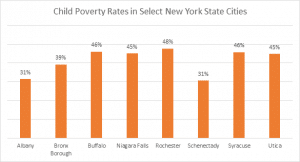 As ACT Rochester and the Rochester-Monroe Anti-Poverty Initiative recently reported, Rochester and Buffalo have among the highest poverty rates of top 75 metropolitan areas in the entire country.

New York’s unacceptably high child poverty rates persisted despite a decade of economic expansion throughout the United States. The period of economic recovery from the Great Recession until the onset of the COVID-19 pandemic only marginally reduced child poverty in New York, falling from a peak of 22.8% in 2013 to 18.1% in 2019. Without bold action from New York’s leaders, in concert with the federal government, the number of children living in poverty is poised to increase dramatically.

The Child Poverty Reduction Act is an important step at reducing New York’s unconscionably high rates of child poverty, and its passage would begin to dawn a brighter day for Rochester’s children. We urge the State Senate and Assembly to prioritize passage of this important legislation early in 2021.