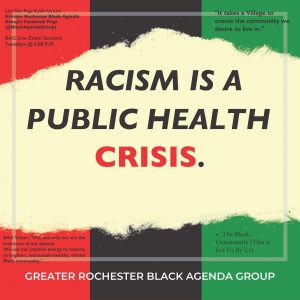 The Children’s Agenda’s mission is to advocate for effective policies and drive evidence-based solutions for the health, education and success of children, especially children who are vulnerable because of poverty, racism, health disparities and trauma.

The board of directors of The Children’s Agenda formally endorsed the Rochester Black Agenda Group’s declaration that “Racism is a Public Health Crisis” in its last meeting on June 11th.  We urge as many other organizations and individuals as possible to join us in signing the declaration.

Racism as a public health crisis starts before birth.  Black women in the U.S. are five times more likely to die than white women from pregnancy, a rate far higher than all other racial/ethnic populations.

Racism as a public health crisis continues in infancy:  Black infants in the U.S. are twice as likely to die as white infants, “a racial disparity that is actually wider than it was in 1850, 15 years before the end of slavery,” as the New York Times reported two years ago. “In one year, that racial gap adds up to more than 4,000 lost black babies. Education and income offer little protection. In fact, a black woman with an advanced degree is more likely to lose her baby than a white woman with less than an eighth-grade education.”

There’s no way around the facts:  racism is a public health crisis.