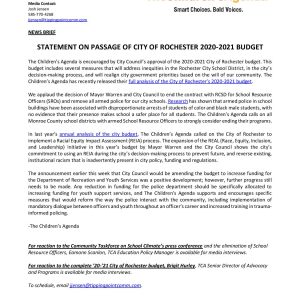 STATEMENT ON PASSAGE OF CITY OF ROCHESTER 2020-2021 BUDGET

The Children’s Agenda is encouraged by City Council’s approval of the 2020-2021 City of Rochester budget. This budget includes several measures that will address inequities in the Rochester City School District, in the city’s decision-making process, and will realign city government priorities based on the will of our community. The Children’s Agenda has recently released their full analysis of the City of Rochester’s 2020-2021 budget.

We applaud the decision of Mayor Warren and City Council to end the contract with RCSD for School Resource Officers (SROs) and remove all armed police for our city schools. Research has shown that armed police in school buildings have been associated with disproportionate arrests of students of color and black male students, with no evidence that their presence makes school a safer place for all students. The Children’s Agenda calls on all Monroe County school districts with armed School Resource Officers to strongly consider ending their programs.

In last year’s annual analysis of the city budget, The Children’s Agenda called on the City of Rochester to implement a Racial Equity Impact Assessment (REIA) process. The expansion of the REAL (Race, Equity, Inclusion, and Leadership) Initiative in this year’s budget by Mayor Warren and the City Council shows the city’s commitment to using an REIA during the city’s decision-making process to prevent future, and reverse existing, institutional racism that is inadvertently present in city policy, funding and regulations.

The announcement earlier this week that City Council would be amending the budget to increase funding for the Department of Recreation and Youth Services was a positive development; however, further progress still needs to be made. Any reduction in funding for the police department should be specifically allocated to increasing funding for youth support services, and The Children’s Agenda supports and encourages specific measures that would reform the way the police interact with the community, including implementation of mandatory dialogue between officers and youth throughout an officer’s career and increased training in trauma-informed policing.

For reaction to the Community Taskforce on School Climate’s press conference and the elimination of School Resource Officers, Eamonn Scanlon, TCA Education Policy Manager is available for media interviews.

For reaction to the complete ’20-’21 City of Rochester budget, Brigit Hurley, TCA Senior Director of Advocacy and Programs is available for media interviews.