“Essential”. . . But Unfunded? Why Child Care is Collapsing 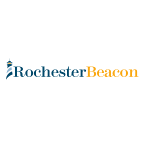 “Essential”. . . But Unfunded? Why Child Care is Collapsing

The New York Times recently ran an excellent and depressing opinion piece titled “Say Hello to That New Spin Studio and Goodbye to Your Child Care.” It articulates the perilous situation faced by parents, children and child care providers in the wake of the COVID-19 public health and economic crisis. Parents who have been at home with their young children for months are looking forward to getting back to work. Unfortunately, they may come to realize that their child care program won’t be able to take their kids back. Children, whose lives have been disrupted by this crisis and thrive on stable relationships with caregivers, may not be able to return to a familiar care setting.

As the article notes, child care, unlike K-12 education, is primarily funded in the United States through private payments from families to providers, with a relatively small share of low-income families receiving assistance to afford the cost of care. Our collective unwillingness to use public dollars to adequately fund care for young children creates a challenge in normal times, as child care is simultaneously extremely expensive for families, often unprofitable for business owners, and low-paying for child care workers.

Still, hundreds of thousands of families receive quality care from regulated providers throughout New York State every year, children build trusting relationships with their caregivers, and advocates such as The Children’s Agenda try to nudge government to make child care more affordable and accessible to families with young children. But the coronavirus crisis is a catastrophe for the child care sector, as the New York Times article makes clear. Thousands of small businesses, most owned by women, many owned by women of color, are poised to go under. Many more thousands of child care workers, again, disproportionately women of color, have lost their jobs.

In New York State, child care has been designated an “essential service” during the pandemic, under the logic that other essential workers would need care arrangements for their children. Despite that, approximately one-third of providers in the state have temporarily closed, and many others are operating with lower capacity. This is primarily due to a collapse in demand for child care throughout the state. Two million New Yorkers, many of them parents with young children, have lost their jobs over the past two months and no longer need or can afford child care. Others are doing their best to work from home while parenting, and are concerned about sending their children to a congregate setting during this public health crisis.

Here in Monroe County, 27% of providers have temporarily closed, including 43% of child care centers, with at least one closure in 90% of the zip codes that overlap with the county. This data was provided by New York State Office of Children and Family Services (OCFS) to The Children’s Agenda, and reflects the situation on May 18th. 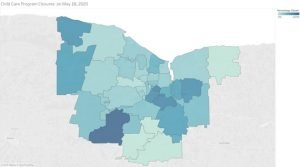 Child care advocates have urged the federal government to allocate $50 billion to support the child care sector during this crisis. Responding to this call, “Child Care is Essential Act” was introduced by Democrats in the House and Senate this past Wednesday. Congressman Morelle and Senator Gillibrand have both signed on to cosponsor the bill in their respective houses. A $25 billion proposal was introduced by two Republican Senators earlier in the month, indicating that there may be some bipartisan interest in supporting this critical sector. National experts have forecasted that without this kind of investment, half of all child care programs throughout the country will be forced to close. New York is projected to lose nearly 180,000 regulated slots.

But why? What makes child care especially fragile during this crisis?

As noted above, child care, unlike education, is primarily funded through private payments from families to providers. Lower enrollment therefore generates lower revenue. In addition, child care, like many industries, can only operate successfully a certain scale or volume. Throughout nearly every week of this crisis, an increasing number of providers throughout the state have decided to close their doors, with hopes to reopen after this public health crisis abates.

At the same time, to limit the spread of COVID-19, OCFS has issued a number of directives and recommendations to child care programs operating in the state. These instructions, modeled off Center for Disease Control guidelines, include new drop-off and pick-up routines, heightened cleaning expectations, a requirement that staff wear face-coverings while caring for children, and a recommendation that child care providers limit group sizes to 10 or fewer people per room, including staff. Reduced enrollment helps keep children, staff, and the broader community safe. But it also makes operating a child care center nearly impossible. Decreased enrollment, whether through decreased demand or public health guidance, dooms the entire business model.

ABC-123 Child Care always attempts to maintain full enrollment, but like most programs, budgets at 85% capacity, and breaks even at that point. It charges families the OCFS determined “market rate” for each age group, pays staff the Rochester region’s median wage for child care workers, and can only afford to offer meager benefits.

Under this scenario, it generates a bit over $700,000 in revenues per year. The table below shows capacity, the number of dedicated staff needed and total revenue by age group.

Let’s assume that ABC-123, faced with dramatically lower enrollment, decided to temporarily close when the coronavirus crisis struck, and is now attempting to re-open. To meet the classroom size guidance issued by OCFS, and to do its part to support public health efforts, ABC-123 Child Care needs to significantly reduce capacity in most rooms. The table below details the capacity changes by age group. This program is attempting to maximize child/adult ratios while remaining under 10 people in a particular room.

After considering every other option, ABC-123 Child Care decides that it has no choice but to lay off the 3 classroom assistants in its 3 Year Old and 4 Year Old classrooms. Those rooms will now operate with one adult at all times.

According to New York State Department of Labor data, child care workers are among the lowest paid workers in the Finger Lakes region; on average, they make less than $25,000 per year. Still, when including fringe benefits, cutting these three staff saves the organization $88,000 per year.

But this isn’t nearly enough savings. The table below shows revenue projections by classroom under this new scenario.

ABC-123’s revenues have fallen by more than $272,000 per year, and are now 62% of their pre-pandemic levels. The program needs to find another $184,457 in revenues or savings to break even. It can’t cut any additional classroom staff and most other costs (rent, utilities, a small administrative team, etc.) remain.

The program’s leadership explores raising rates to cover the gap, and discovers that they’d need to raise weekly fees by a whopping 42%.

The center’s leadership team cannot fathom increasing prices that much. How many of their families could possibly bear the cost of this fee increase? A family with an infant and a preschool age child enrolled at ABC-123 would see their costs grow from an already unaffordable $27,300 to $38,700 a year.

ABC-123’s ownership concludes that raising fees by that much on middle-class families is not a realistic option, but neither is finding more than $180,000 worth of cuts. Faced with the prospect of re-opening but quickly going broke, they’re forced to make the decision to remain closed indefinitely. When their lease is up at the end of the summer, they decide not to renew, closing forever. Families that were relying on ABC-123 for child care scramble to make other arrangements, perhaps resulting in parents leaving the labor force.

Now apply this scenario to the entire country. Not every program will be forced to close. Some serve affluent families who can afford to bear such shocking rate increases. Others operate multiple sites and might be able to find enough efficiencies to muddle through. And still others have diverse enough program models (including Pre-K funding), cash reserves and/or access to credit to weather this period. But the typical business model of America’s child care sector, already frayed, cannot be sustained under these circumstances.

The coronavirus crisis has devastated many sectors, from airlines and tourism to restaurants and museums. As those sectors try to recover and rebuild their operations, their workers will need child care. Two-third of New York’s children under 6 years old live in households where all available parents work. If New York’s child care capacity shrinks by half (as predicted), thousands of families will be left without care. Government’s long term failure to appropriately fund child care, coupled with an apparent short-term unwillingness to sufficiently help child care providers weather this storm, will damage the prospects of economic recovery.

To date, New York State has only allocated $30 million of the $164 million it received from the federal government through the Coronavirus Aid, Relief, and Economic Security (CARES) Act, and has yet to share a plan for what it will do with the remaining $134 million. The Children’s Agenda and other advocates around New York State are urging Governor Cuomo to use the funds to enable child care programs operate safely at reduced capacity, providing them with resources to retain staff and stay whole until the pandemic and its effects diminish – as has been done with the K-12 school system. Even that $134 million is wholly insufficient, though, supplying only approximately $8,000 per regulated provider in the state. More federal relief is necessary to ensure children receive safe and nurturing care, parents can return to work, and our economy can rebound.