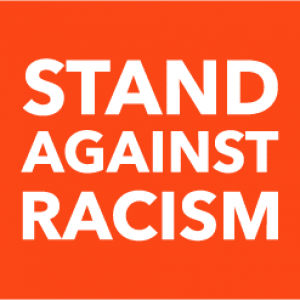 The YWCA’s Stand Against Racism began yesterday, an event The Children’s Agenda has participated in since it began.  As a white man, I’ve struggled with how to make this event meaningful — not because I doubt its importance, but because of its staggering importance.  Any branded buttons, articles, educational events, or days devoted “against” it seem to fail to rise to any consequence.  There’s a Grand Canyon of difference between using phrases like “woke” for self-congratulatory advertising or for applause from the already-converted (like so many social media posts) — versus taking action in the world to root out something as insidious and all-permeating as racism.

My 16 year-old daughter recently introduced me to a great song about this. In “Nina Cried Power, while name-checking various music heroes including Nina Simone, the Irish artist Hozier sings

It’s not about “woke-ness.” Awareness is important, but as with words, actions are what count. Anti-racism is about pursuing justice in the material world — not (just) fixing mental models. COVID-19 is far deadlier today to African American and Latinx Americans than people like me (in WI, Black people are 6% of the population and 40% of the fatalities). That fact isn’t unusual to COVID — nor is it particularly new, angrily enough. These inequities exist precisely because of unequal power relationships: lower incomes, riskier jobs, less space for distancing, food deserts, more pre-existing conditions, less health care, the digital divide. . . All real world, geo-spatial and material injustices that are both cause and effect of whether someone’s “woke” or not. But racism is only dismantled by systemic policies, political change, and social movements that address historic inequality, righting wrongs.

A very relevant example of this from our work at The Children’s Agenda is the widespread tendency to shift culpability from the public policy and systems (income supports; stable, quality, affordable housing and child care; etc., etc.) which make the biggest difference in children’s educational achievement — to blame individual parents for children’s different achievement levels.  This shift of responsibility happens at many levels, and includes at times what David Kirkland calls “lightweight racist use of research evidence.”  Writing for the W.T. Grant Foundation in No Small Matters:  Reimagining the Use of Research Evidence from a Racial Justice Perspective, Kirkland wrote:

I’ve analyzed the quantitative data narrative of causation typical in research that examines how low literacy rates drive high incarceration rates.  The treatment of the evidence tends to locate a problem in the individual — usually Black or Brown — who lacks something (e.g., words, motivation, grit, resilience, etc.).  But what if we used the evidence differently?  What if we were able to acknowledge the deficit framework in action?  I wonder if we might come to other conclusions — for instance, that the same thing that causes low literacy rates also causes high incarceration rates?  That is, what if low literacy rates did not cause high incarceration rates, but both shared a common structural cause such as institutional bias or trauma?  . . .One need only look at how our misreading (and miscalculation) of achievement data has yielded overly racialized and unhelpful gap discourses, let alone how our collection of achievement data has led us to avoid questions of what constitutes achievement and how those constitutions function to redesign racial caste as opposed to the production of knowledge useful for advancing equity.

Even experts like The Children’s Agenda are not immune from reflexively reinforcing these racist messages.  Did you know that kids growing up in poverty hear 30 million fewer words by age 3?  You’ve probably heard that study finding before — cited more than 8,000 times since 1992, and hugely influential on educators, policymakers and us here at The Children’s Agenda.  The problem is that the number came from just one study, with only 42 families, and subsequent, more rigorous studies have either failed to replicate that finding or have shown a far smaller difference.  As NPR summarized more recent studies in June 2018,  “It’s not necessarily that poor children aren’t ready for school; it’s that schools and teachers are not ready for these children.”

Sofia Bahena, an education professor at the University of Texas, San Antonio, says . . . “We can shift the question from ‘how can we fix these students?’ to ‘how can we best serve them?’ It doesn’t mean we don’t speak hard truths. But it does mean we try to ask more critical questions to have a deeper understanding of the issues.”

. . . Jennifer Keys Adair at the University of Texas, Austin published a study last year of how the “word gap”-rubber is meeting the road of schools. She and her co-authors spoke with nearly 200 superintendents, administrators, teachers, parents and young children in mostly Spanish-speaking immigrant communities. The educators expressed the belief that the children in grades pre-K through third in this community could not handle learner-centered, project-based, hands-on learning because their vocabulary was too limited. And, the children in the study themselves echoed the belief that they needed to sit quietly and listen in order to learn. Adair says the ‘word gap’ has become a kind of code word.  “We can say ‘vocabulary.’ We’re not going to say ‘poor’ and we’re not going to use ‘race,’ but it’s still a marker.”

In other words, lightweight racist.  Racist stereotypes of black and brown parents and families have a long history of poor science, from creating “race” as a difference in the first place, up through measuring skull sizes, to the book The Bell Curve.  As Dr. Ibram Kendi wrote in Stamped from the Beginning, “The racist mandate of ‘personal responsibility’ convinced a new generation of Americans that irresponsible Black people caused the racial inequities, not discrimination — thereby convincing a new generation of racist Americans to fight against irresponsible Black people.”

The good news is that there are evidence-based, culturally responsive and appropriate methods proven to increase school readiness and language acquisition, particularly with kids of color.  Good research evidence, along with good uses of that evidence, show that home visiting programs like the Nurse Family Partnership, high quality Head Start and Early Head Start education programs, and high quality early child care make a huge difference in children’s lifelong educational outcomes (not to mention health, employment and other successes) — especially for low-income children and children of color.

So here’s where we return to advocating for justice.  Our federal, state and local public policies have failed to fund these programs to scale to fully meet the need, have failed to integrate them into a continuum of children and family services, and have failed to sustain those programs at all times, including this crisis period right now.  After our COVID-19 crisis subsides and we begin to rebuild our fragile systems that currently fail so many, we have to win the political changes and public policies that will raise our next generation — to be free of today’s pervasive racial inequities and for success in life.  That’s our mission at The Children’s Agenda, and that’s how we’re marking the “Stand Against Racism.”  It’s “not the waking but the rising.”