RCSD finally names providers who lose out in pre-K shift. Some say they were never told

RCSD finally names providers who lose out in pre-K shift. Some say they were never told 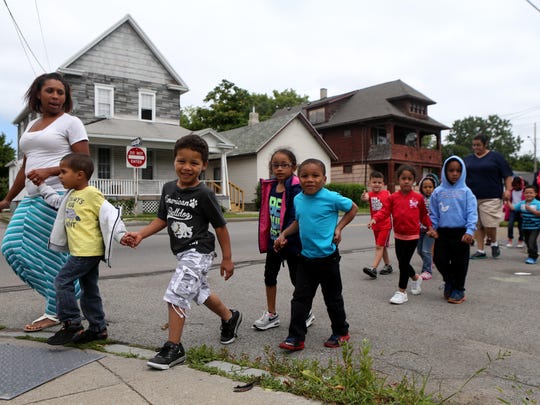 Buy PhotoTiffany Archibald leads her Pre-K summer program at Ibero Family Center to the library on Joseph Avenue. The summer learning program that targets Rochester City School District students was expanded to Pre-K this year with grant funding. (Photo: File photo 2015)
Back in January, when the Rochester City School District first proposed shifting some prekindergarten seats from community-based organizations into district buildings, officials said the list of affected organizations would be published as soon as it was ready.

It took until March 27 for that list to be presented internally, a month after the school board approved Superintendent Terry Dade’s proposal. It still has not been made public, but the Democrat and Chronicle obtained a copy.

It includes two locations of Action for a Better Community’s Head Start program and two run by the YMCA, as well as eight other community entities. Two of them were planning to close their doors anyway.

The district has drawn strong criticism for its handling of the pre-K changes, both for the actions taken and its process along the way.

Some CBO leaders said they had not heard from the district by Wednesday morning. Instead they relied on word of mouth, parent reports from the placement office and a leaked copy of the list that Dade distributed last week.

“There’s been zero communication to us. Zero,” Action for a Better Community CEO Jerome Underwood said. “Not a phone call, not an email. It’s completely cut off.”

Underwood’s organization stands to lose about 200 seats, which he estimated at $1 million in revenue. Besides the leaked list, ABC heard from a mother Monday morning who was told at the RCSD placement office Monday that her preferred site, at the Head Start location on Jefferson Avenue, was no longer available, Underwood said Wednesday morning.

The list was actually finished and ready to be distributed March 19, RCSD Chief of Staff Annmarie Lehner said, but the district waited because it was focused on responding to school closures during the coronavirus pandemic.

“The CBOs and Board staff were updated at essentially the same time,” she wrote in an email.

Dade’s proposal started as a bid to fight declining enrollment and save money in the midst of a major budget shortfall at the same time. He suggested closing schools 44 and 57 and reusing the buildings as standalone pre-K centers.

The students for those centers would come from the CBOs with whom the district has long contracted for pre-K services. Those organizations, Dade argued, were serving too large a proportion of the district’s own students, who might be more likely to remain in RCSD for kindergarten if they started in a school building in pre-K.

The promise of savings in the proposal quickly vanished, especially after the district announced it would offer costly wraparound care at its two new centers. Despite the cost uncertainty, the school board voted Feb. 27 to approve the plan, largely in order to prevent the two school buildings from being converted to charter schools.

Even before the vote, though, the district and school board recognized a flaw: standalone pre-K centers must be licensed as day care providers through the state Office of Children and Family Services. RCSD’s existing pre-K center was lacking that licensure for all four years it has been open, and maintaining it would add yet again to the cost of the proposal.

Instead, the district announced it would add special education classrooms in grades K-1 to each of the three centers, thereby exempting them from the child care licensure requirement.

Dade still has not presented an accounting of the additional costs included in the plan, even as he scoured the district for millions of dollars to trim in his 2020-21 budget proposal. He said in an interview Tuesday morning that such an analysis existed, but had not provided it as of Wednesday afternoon.

As for the CBOs that lost seats, Dade said in the interview Tuesday that the decision was based on several factors including geography, demand and the sites’ history of violations. School board members complained, though, that they had not received more details ahead of the vote Feb. 27.

“I still support expanding pre-K and UPK within the district,” said Natalie Sheppard, who voted for the plan. “I definitely have concerns with changes in what was originally proposed.”

Ricardo Adams, who also voted for the plan, objected to Dade’s proposed removal of pre-K parent liaisons, which he called “the most qualified form of parent engagement” he has seen.

In an emailed statement, The Children’s Agenda called on Dade to create a task force “to minimize the disruption to families from these closures and develop a thoughtful and collaborative long-term plan for pre-K and kindergarten enrollment.”

Minutes after saying he had not heard from the district, Underwood reported that RCSD Early Education Director Robin Hooper had just sent him a PDF of a letter notifying him of the changes.

It was dated March 19, when it was first supposed to have been sent out in the mail, and concluded: “We look forward to continuing this partnership.”

“This is worse than crazy,” Underwood said. “We’re supposed to be partners.”