The chants of “Let teachers teach” and “Education is a right, that’s why we have to fight,” echoed clearly down West Broad Street early Thursday evening. They came from a rally organized by the Rochester Teacher’s Association and were meant to send a message: stop the proposed layoffs of Rochester School District teachers.

The teachers’ union organized the rally in response to a Superintendent Terry Dade’s plan to lay off 218 district staff members, 152 of which belong to the union. The school board will vote on the cuts on Thursday, December 19.

Standing outside of the district’s offices just Thursday’s regularly scheduled meeting of the school board, RTA President Adam Urbanski grimly referred to the proposal as a “Christmas massacre.”

“We have an alternative proposal for the Board of Education we’re advancing today—don’t act until you can figure out how we got into this mess,” Urbanski said. “The teachers and students didn’t cause this problem, they shouldn’t be punished.”

Urbanski urged the board to delay voting on Dade’s plan until June, a move that would buy time for the district to rally for additional funding from the state. The staff cuts proposed by the superintendent would amount to a projected $10.4 million in budget savings.

Dade had previously told the board that under his plan, job cuts are expected to bridge about half of the district’s budget deficit, with cost controls, program cuts, and at least $20 million from the state covering the remainder of the gap. The number of layoffs, he told them, was subject to change.

The district’s mid-year budget cuts were prompted in part by overspending on the previous year’s budget. The district’s former chief financial officer, Everton Sewell, told the Board of Education in May that the 2018-19 budget was on track to be balanced when it was not.

Sewell resigned in October and Dade has implied that Sewell and his finance team misled the board. The shortfall from last school year was found to be approximately $30 million.

In an interview, school board President Van White pushed back on Urbanski’s suggestion.

“It’d be Groundhog’s Day,” White said. “That’s exactly what happened this year. We got to the end of the fiscal year and we were behind the eight ball. The whole idea here is to avoid that happening again.”

Younger teachers who have yet to receive tenure, as well as special education teachers and long-term subs, are the ones most likely on the chopping block.

Mary Lupien, a three-year reading intervention teacher at School 28 and who was recently elected to the East District seat on City Council, said she expects to receive a pink slip.

“From what I’ve heard they don’t feel like they have an option, that they’re running out of money and if they don’t do it now, it’ll be worse next year,” Lupien said. “But instead of putting all of this time and effort into making the cuts now, they should put that effort into demanding the money we’re owed from New York State.” 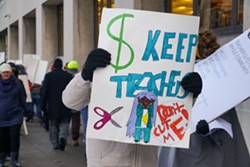 The Children’s Agenda, an education advocacy group, has argued that the state, under its own school aid formula, should have given the Rochester district $97 million more for the 2018-19 budget year than it actually did.

The RTA members and supporters gathered on West Broad Street asked why the board wasn’t fighting for the money. The school board’s White later noted he “hopes Albany is listening.”

Michael Tobin, a high school special education teacher who chairs the RTA’s Action Committee, said the board needs to search for an alternative to laying off teachers.

“When we are in a budget crisis like this, every possible option needs to be explored to solve it before we start making cuts in the classroom,” Tobin said. “I don’t work in Central Office, I’m not a board member, but this is the type of thing that just shouldn’t happen. It’s someone dropping the ball somewhere.”

Later, at the start of the school board’s meeting, 37 speakers addressed the commissioners; there were only two speakers at Tuesday’s meeting, where Dade unveiled his plan for layoffs.

A resounding, if unsurprising, theme rose to the top: the layoffs will hurt students.

Special education teacher said that their students have made life-changing progress, which could stagnate or reverse.

Teachers also cautioned that, in many cases, students may lose the one stable, trusting person in their lives. They pointed to results of the District’s 2017 Youth Risk Behavior Survey, which found that 85 percent of RCSD students have experienced some sort of potentially traumatic experience.

“Rochester has one of the highest poverty rates in our nation, our children are faced with many adversities everyday—violence, trauma, mental and physical abuse, and murder,” said teacher JaNiya Noble. “But there is light, and that light for many children is school. School is a safe zone, a home away from home.”