Understanding the Rochester City School District Budget in a Nutshell 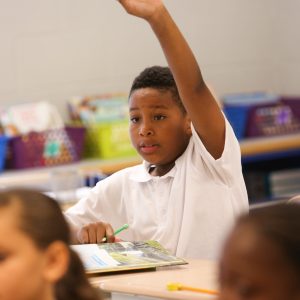 Understanding the Rochester City School District Budget in a Nutshell

This is the first of a series of blog posts regarding the current RSCD budget situation.  Click here to view the second blog in the series, Budget Gimmicks and Need for Transparency.

Understanding How We Got Here

A couple weeks ago, the Rochester City School District (RCSD) reported to the City of Rochester and the Board of Regents that they had overspent their budget by a significant amount. This overspending was flagged by an independent auditor with whom the district contracts to audit their budget every year. On Thursday that number was reported by Superintendent Terry Dade to be about $30 million. This raised many alarms about the fiscal health of the district, and concerns about what cuts will be made and how they will affect kids in the classroom. The Children’s Agenda shares these concerns, as we have spent 15 years as an advocacy organization monitoring how public money can best be spent to support children.

As we move forward as a community to address this financial crisis it’s important we understand how we got here, how RCSD develops consistent transparency, and how corrective actions must empower families and put kids first. We will explore these issues in future blog posts.

But first, where did that $30 million go?

The answer, according to financial records, is to pay for things that RCSD must provide, like transportation, employee benefits, substitute teachers, and charter school tuition. Cost projections for these areas were too low, sometimes by more than $10 million.

Cost overruns are not uncommon. In fact RCSD has under-budgeted for substitute teachers and contract transportation (see table) every year for the last three years. Overspending in other areas (including charter school tuition and benefits) is less common. Overall, the problem was too much overspending in too many places, and there was not enough flexibility within the budget to cover those additional costs.

The 2018-2019 budget included many risky and in some cases dishonest cost projections, because of a flawed budget-making process and a host of external pressures. In March, 2018, then Superintendent Barbara Deane-Williams was making an aggressive push to rethink issues of equity, student placement, and building utilization through her Path Forward initiative. The Path Forward initiative consumed much of her leadership team’s time during the months leading up to the release of the 2018-2019 draft budget. Her team’s preoccupation with Path Forward left the financial decisions to the finance department with seemingly little input from other department leaders. This delayed the budget making process, and resulted in the finance department presenting an unbalanced budget on March 27.

Just a few weeks earlier in March was the heartbreaking death of student Trevyan Rowe, who walked away from his school and drowned in the Genesee River. This tragedy underscored the dysfunction and multiple changes in leadership within the special education department. The special education department was under threat of legal action for being out of compliance with state and federal disability laws, and was negotiating with Empire Justice to develop a consent decree in place of a lawsuit. These compliance problems cast doubt on whether Trevyan was ever properly evaluated for a disability, or connected to the necessary supports that might have prevented his untimely death.

And yet these were not the only challenges facing RCSD. On September 20, 2017 Hurricane Maria made landfall on Puerto Rico devastating the island’s infrastructure and killing thousands of people. With a large established Puerto Rican community, Rochester received many displaced families from the island over the next 6 months. This added 560 English Language Learners to the district’s enrollment during the peak of the migration (see graph), deepening a shortage of bilingual and English as a second language staff. 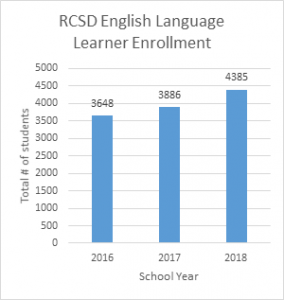 Enrollment numbers are for April 1st, each school year is represented by the starting year, ie. 2016 is 2016-2017. Enrollment fluctuates throughout the year and these numbers do not reflect the highest enrollment in a given a school year.

Finally, these events were accompanied by a push from the superintendent to add reading intervention teachers to boost low reading achievement across the district. These reading teachers, combined with the need to restructure special education and add bilingual staff, created huge pressure on the finance department to increase spending while also closing a $52 million budget gap.

Given all that pressure and with little input from instructional or operational staff, the finance department made a number of cuts to balance the budget. Unfortunately, those suggestions were never made public, and were rejected almost immediately by the superintendent’s leadership team according to sources familiar with the process. The finance department was told to find another way to maintain or even increase spending in certain areas. At the last minute another draft was presented just before the board of education was set to approve the 2018-2019 budget.

The 2018-19 RCSD budget was plagued by a rushed timeline, multiple far-reaching crises happening simultaneously, leadership distracted by its own major initiative, pressure to increase spending in multiple areas, a huge budget deficit to close, and many last minute revisions with little input or understanding from those outside the finance department.

A full understanding of how these decisions were made would provide some accountability. However, responsibility for these cost overruns is more systemic than the individuals that made these decisions or the people that pressured them to make these decisions. As long as RCSD faces a large structural deficit every year, lacks transparency and collaboration in its budget-making process, is perpetually responding to crises and external pressures, and uses unsustainable financial gimmicks to prop up spending, there will always be the potential for problems.

Whether better financial decisions in the past may have allowed for greater spending flexibility during this particularly difficult period is an important and necessary question. So too are the questions of whether funds are currently well spent by RCSD or if the funding that RCSD receives is adequate to meet student needs. Some say RCSD spends too much money, while others point to New York State’s own funding formula (Foundation Aid) for schools which shows Rochester was owed $97 million in additional funding from the state during the 2018-2019 school year.

There is much to unpack here, and the Children’s Agenda will touch on these and many other issues in our upcoming blog posts about the unfolding budget crisis. Hopefully now you have a clearer picture of what led us to this point.

The Children’s Agenda is a small non-profit dedicated to evidence-based policy solutions that support the health and well-being of all children in our community. If you have additional comments or questions about the RCSD budget, you can reach me by email.