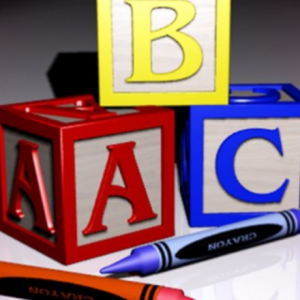 Rochester, N.Y. – Legislation submitted by Monroe County Executive Cheryl Dinolfo would see a 15 percent increase – across the board – for County-set reimbursements for Preschool Special Education service providers.  Dinolfo says this would be the first rate adjustment for Preschool Special Education services in a decade.  The increases would apply to services including, but not limited to, physical and speech therapy, one-on-one services and parent counseling and training.  The legislation would also offer group rates to providers who offer services to multiple children in the same setting.

Unlike Early Intervention Services, counties in the state have the power to adjust certain reimbursement rates for Preschool Special Education providers.

Dinolfo says the rate increases would be a proactive measure to ensure Preschool Special Education services do not encounter problems similar to what’s being seen in Early Intervention.  “These rate increases matter because they’ll allow us to retain the best providers in preschool programs, increase quality of services and ensure the sustainability here in Monroe for the long-term,” Dinolfo said Tuesday.

Governor Andrew Cuomo proposed a five percent increase in funding for Early Intervention, however Dinolfo is encouraging him to match 15 percent. 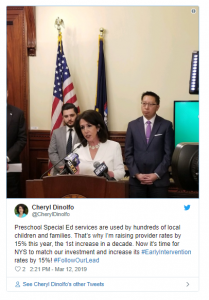 “This isn’t about politics. This is about people,” said Dinolfo. “It’s about the success of our children for years to come. It’s about doing the right thing for hundreds of children and families who rely on these services.”

The county already invests $35 million into the program, serving about 2,500 children each school year.

County Legislature Minority Leader Cindy Kaleh released a statement, saying she was relieved about potential help for service providers but argued this could have been brought about sooner.

“I am pleased that the families that rely on these services and those that provide them will finally find some relief. However, I find it laughable Ms. Dinolfo would call this proposal ‘proactive’ as the parents, workers, and child advocates have been asking for this for months,” the statement read. “The Democratic Caucus tried to have these discussions during last year’s budget process to no avail. While the end result is something we all have worked for, the process was needlessly drawn out. I would suggest that when she is thanked for taking action, she apologize for taking so long.”

The legislation will be considered at the next Monroe County Legislature meeting, scheduled to be held in April.